Around 1968/69 , my wife Kay and I went on holiday with our  youngest children, Geraldine Deirdre and Michael. We stayed at a small hotel in Southport, near Liverpool. It is a lovely town and we had a memorable holiday there. We became very friendly with an English family who had come there from Mansfield in Nottinghamshire. Philip and Doreen Broughton had two children, Paul and Jane  and it started a lifetime friendship. We shared  many  holidays together in both England and Ireland., over the years. I  recall one memorable occasion when we visited Belfast. It was in the early days of the troubles there,  and as we walked around the city centre we came upon a street which had a large number of British soldiers and police. Philip, with his broad accent, had no trouble speaking with  some of the soldiers. They told him that an Orange parade was due to pass that way. Across the road was a nationalist  block of flats, and they were there to prevent trouble. We learned later they were the Divis Flats which became well known with troubles developments later on. When the parade approached, it was quite small, a local lodge only, but  we could hear the band getting much louder as it got nearer. We saw the lodge members waving and shouting at the residents who were now out on the balconies and were returning the banter. Took only a few minutes to pass and things returned to normal. Little did we think it would get so bad later on in time. ‘Banter’ indeed?

Philip and Doreen on their last visit to Ireland.

I had been working in the coal business for over twenty years at that time and was familiar with the names of the various collieries in the East Midlands area and had told Philip that. It was on one of our visits to Mansfield that I managed to visit the coal mine. Philip had started working in the mines as a young man but following an accident had to give it up. Doreen’s Dad, Harry Clarke,  and Grandad were miners. Her Dad managed to arrange for me to visit the local mine Mansfield Colliery. It was to be on Sunday when the mine was not working. I was to be accompanied by Philip and Doreen’s Mum, Phyllis Clarke,  who had never seen where her husband and her own dad had worked. Kay and Doreen declined the offer to come with us.

On the day in question we kitted out in old bakery overalls, that Philip had, and arrived at the Colliery. We were met there by the Colliery Safety officer who would be our guide and minder on the visit. There were about 10 people in all and after due warnings and instructions we entered the mine. First a large elevator which could hold many more brought us down quite a distance to the mine centre. A large hall with Tunnels and tracks coming from them. We were brought to one spot wher we were told to lie on a beltconveyor which was called a ‘man rider’. We lay face down on it with some trepidation.  This travelled downwards for about 800 yards to another smaller space  or hall  also with tunnels running off it. Our Guide explained that we would walk down one tunnel to the coalface,then travel across the coalface,  and walk back another tunnel. The tunnel was high enough to wak through. A few times we had to pass through areas used for controlling the air pressure or oxygen level. You opened one door and entered an area then closing that one before opening the next. Made you think of the problems which existed down there. At one point he pointed a doorway in one of the tunnels which, he said, lead to a neighbouring mine. This could be used as an escape route, if required. I believe this was Srerwood Colliery.

When we reached the end of that tunnel we were at the coalface. An area maybe 30 feet in length wher the roof was supported by steel jacks, on the style of car jacks except much larger. I remember thinking how low it was to have to work in. Around 3 feet high. We had to crouch down to enter. We could see a seam of coal a few feet high extending to our right. There was a machine parked at the end which our guide explained was used to travel across the coal face cutting out the coal as it went. This used to be cut by hand in earlier days. This was called trepanning. The driver sat on the machine like the driver of a large motor mower. There the comparison ends. The coal was removed by conveyor belt. The machine reminded me of a small version of the tunnelling machines they use these days to construct road tunnels.. 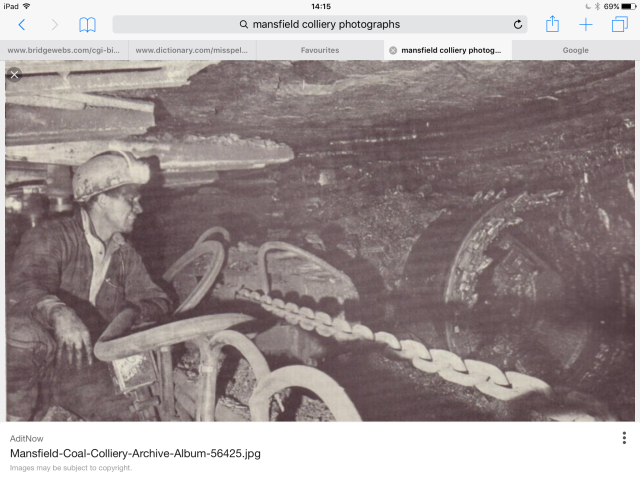 We were told we were going to proceed to half way across the coal face where the operations of the Colliery would be explained. It was not easy as you klhad to crouch. The coal face was about 250 yards across. No complaints as we all thought about the men who had to work there all day. Reaching the centre we sat in a circle and the facts became clear. As the machine move forward the supports had to be erected t When they had gone a certain distance they would remove the supports at the rear. The roof would eventually collapse. Roof falls were responsible for many deaths in the mines. The coal would be conveyed to the surface  conveyor belts. In earlier times this would be in wagons or carts pulled by pit ponies. They had an advanced type of screening plant, which was several stoEntering the top screen all the large coal was separated. I I remember correctly , these were sold as ‘Cobbles’.Then the next screen produced ‘Nuts’ which were about 3inches across . The different sizes were conveyed d by chutes to railway wagons lined up beside the plant. Each bore the National Coal Board name but also bore the Colliery name. I cannot recall how they managed the smaller sizes.  The waste from the coal was kept in heaps in the grounds of the Colliery and was managed very tightly.

When we in Dublin purchased a cargo of coal we were given a list of the collieries which were included. In Donnellys, where I worked , our  best coal was named ‘Mossbank Nuts’, which was exclusively East Midlands coal, including Mansfield Colliery. The names of all the collieries had become well known to me over the years. Each cargo was entered in our ‘Arrival’s Book’. This was why my visit to Mansfield Colliery meant so much to me. I am sorry I cannot recall our ‘guide’s’ name, but many thanks in retrospect. Also to Doreen’s Dad for arranging it.

i am indebted to ‘Welcome to Mansfield Colliery’ site for some of the photos. It is very worth while paying it a visit.

This is one of the roof supports mentioned above. They replaced the wooden pit props used for many years. I was reminded of the story told to us when seated in the mine that day.

During the war years many young men were sent to work in the mines. They were known as ‘Bevan boys’, after the Home Secretary  at that time. One of them approached a miner on his first day and asked ” Where are the toilets”. The miner laughed, wet his finger, and held it up in the air. Then nodding, he told him to go up the tunnel and find a nook or cranny. The young man then asked ” Where is the toilet paper”. The miner went over to his coat which was hanging on a pit prop, and moving it aside, he pulled a piece of bark off the prop, and handed it him. time later the young man returned, and thanked the miner, and added, “I put your scraper back in your pocket”

We were so taken by this story that several of us peeled a small strip of bark off some of the wooden props that were between the new ones. I still have my piece ‘The scraper’. The only physical memento I have  of my visit.