Married Quarters
There were 96 houses in Portobello, so there were always plenty of children. Inevitably they got to know most of the other children, but particularly those living in their own block. Because it was an enclosed environment, children were freely allowed to go out to play at a very early age. There were several areas, between the blocks, where they could enjoy the usual children’s games. Girls played all the old skipping games and ‘ ‘ball against the wall’ games that were popular in those days. Girls also shared in boys games like ‘Relieve-io’ and rounders. Marbles in season, football and a ball game called ‘King’ were the boys choices. Handball was popular especially when they could get access to the handball alley which was for the soldiers and was out of bounds to us.The end wall of G block was the usual venue for this. No televisions or mobile phones then, of course. In fact, there was no phone in the married quarters area at all. Down to Rathmines with your pennies was the order of the day. Personally I never used a phone until I started work at 18.

Alhough the area known as the ‘Married quarters field’ was off limits to children, they managed to access it for all types of ball games. The field was, and still is, surrounded by a high railings, but inevitably boys would dig holes underneath them, when needed. Occasionally a bolt would ‘fall’ off one of the rails and this way of entry was more popular with the girls. The cost of repairing these were added to ‘ Barrack damages’ which were shared by all the occupiers. The picture below was taken in front of the railings at G block. It features from left mysel (no14), Eddie Grinsell (17)and Donie McKnight (4). We were dressed for school drill display that I mentioned in ‘Early school days’.

Because of the popularity of boxing in the army at that time, many of the boys joined Arbour Hill Boxing Club with a lot of success. My bNotably, Jackie Saunders and Willie Lenihan. Boxing records will show how well they both did.   I attach an extract from the Irish Independent on 16th August 2005,

I also attach a photo of a number of girls who were given drill instruction by one of the army instructors. I knew many of the girls included. I believe it was taken around 1931.

This includes Angela Gallagher , mentioned later, and Edna Duignam who later o became her bridesmaid some years later. Also Bridie and Kathleen Roy and Maura Grinsell from G  block. The building behind them is the Sergeant’s Mess.

Sports aside, in the early days and, particularly during the thirties, there was good activity in the concert hall, in the barracks.  concerts were held  and also many plays were performed. I attach a picture which includes many of the barracks children, who were members of the dramatic group.

I also remember one occasion in the concert hall, when the chaplain, Rev. Fr. Casey, gave a showing of lovely slides he had taken at the Oberammergau Passion Play which he had been able to visit. He gave an excellent talk about the play which is performed every ten years. Later, during  the war years, when the number of chaplains grew by necessity, Fr. Cases, as head chaplain, was appointed Monsignor. After the war he was transferred to Skerries as Parish Priest where he finished out his days. The locals have many fond, and often relate,  funny memories of him. I have read recently that an exhibition of his many photos of travel in America and other places had taken place in Dublin. Despite enquiries made, I was unable to see it.

I recall a funny incident which occurred when an assistant chaplain was appointed to the barracks. The Monsignor asked my Dad to go to confession to the new priest. He said, “I want to find out what type of penance he gives. Soldiers don’t have time for a lot of prayers”. He practiced what he preached. His sermons and indeed his  Masses were always short. I used to love the church
Families in the married quarters were allowed to attend Mass in the garrison church. This was situated on the far side of the barracks adjoining the Grand Canal. A gateway, beside the church leads to Grove Road, but was seldom used and was off limits to families.Even at Mass army regulations applied. The first two rows of seats on one side were reserved for us and the next two for officers families. Some of the children shared the same schools and knew each other that way. I learned to serve Mass there and my Mam dressed the altar with flowers and also crocheted the altar cloths that were used there. She did this for many years.

Many people, outside the barracks, thought we were very lucky to be living in such ‘luxury’. Well looked after, all repairs and painting done, and so on. Yes this was true in an age when many were living in such awful accomodation throughout Dublin, but as in every community there were families with problems. We are talking about a period when being a soldier was not considered an acceptable career. Wages were very low and, although there was a contribution for each child, many families were hovering near the bread line. The several messes, which were available to the soldiers, where they found enjoy billiards and card games, and also have a drink, could be abused at times.

I can recall a nice gentleman, named Mr. Millar, who called regularly, in his ‘pony and trap’. He was a money lender. I can also remember my mother lending certain articles to some neighbours, so they could raise money by pawning them. My parents had only got ls  two children and neither my Dad nor my Mam ‘drank’, so we were considered better off. I do remember one occasion when one mother who had a larger family was found by her doctor to be malnourished. This was because she was neglecting herself, while trying  to mind her children,

It gives me great pleasure to see the difference these days. Our soldiers are so respected everywhere. Such a difference. Still I knew so many of the Dads and Mams in my day and they were such lovely people. Many were from the country and football and hurling rivalries were always there. We got to know their country relatives mainly through visits for Croke Park. The Duggans (Graiguenamanagh) and Grinsells (Mooncoin) both from Kilkenny and the Mahers from Tipperary were great opponents. The Fingletons from Stradbally in Co. Laois wear regular visitors.

I got to know many of them and I was invited to, and spent, several lovely weeks with the Duggan family in Graiguenamanagh. Tim and Eddie were blacksmiths and their sister Molly was in charge. Lovely people, they lived in an area called ‘the Turfmarket’. It is still there although the forge is now closed but still standing. All this as a result of barrack friendships.
Lifelong friendships also developed from living there. Many reunions have taken place over the years and Masses offered in the garrison Church for those gone to their rewards. I am still in touch with the Fingleton family although we have recently lost Jim. Phyll and Patty in Dublin, and Nick in Adelaide, are still with us. Nick played Gaelic with Dublin before joining the police in Australia. The Pollocks, Mairead, Vera And Brendan are also going strong in Dublin as is Martin Duggan and his brother Jimmy. There are so many to remember including all the Dunnes and Stauntons all from our block. Many of our neighbours participated in the Tattoo in 1945, and are shown in the following photos at the R.D.S in Dublin. The theme was a reenactment of the 1916 rising at the G.P.O. 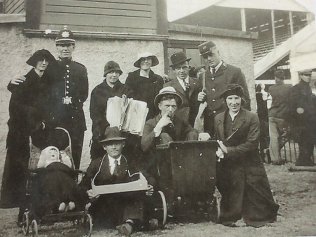 I had a special friend , Angela Gallagher (Spain) who, with her parents, were lifelong friends with our family. Sadly she passed away a few years ago at the age of 93. They lived next door to us in Beggar’s Bush in 1924 and Angela and I grew up together and I was best man at her wedding to Peader Spain. Our parents were lifelong friends. Margaret Gallagher was from Cork and had met her husband, Jack there. He was from Liverpool and was a bandsman serving with the British army. He subsequently joined the No 1 band when it was formed. 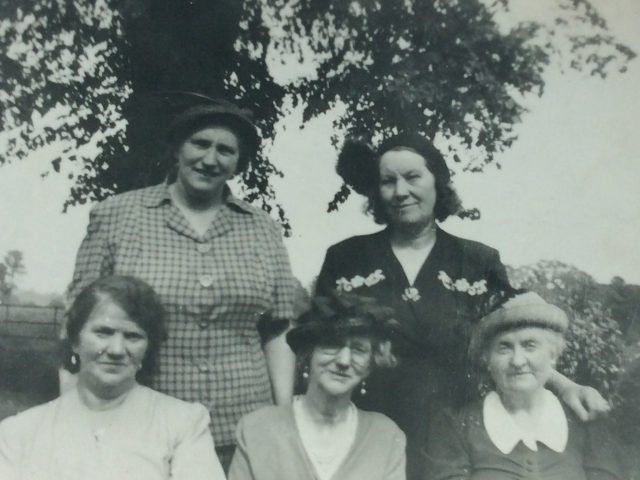 My Mam in the centre with Margaret Gallagher on the right and her sister, Essie on the left. Behind are Mrs O’Reilly (D block) and Mrs Austin (E block). Good neighbours.

I have come across these videos on You Tube . My Dad John McGillicuddy is in the No 1  Band video.

If anyone has any special memories they would like to share with us please let me know.